(on footsteps) They cannot be counted because they each unit has a qualitative character: a style of tactile apprehension and kinesthetic appropriation. Their swarming mass is an innumerable collection of singularities. Their intertwining paths give their shape to spaces. They weave places together. In that respect, pedestrian movements form one of those real systems whose existence in fact makes up the city. Michel deCerteau

JoyceWalks is a psychogeographical tool which generates walking maps based on routes from James Joyce's Ulysses in any city in the world using Google Maps. The project draws on the traditional Bloomsday celebrations which take place every June 16th in Dublin involving reenactments of scenes from Joyce's seminal novel of the city.

The system prints maps to be used as the basis of walks exploring the city of your choice and generates mash-ups using your pictures and videos documenting these walks to share with other users.

Inspired by the Situationist Dérive JoyceWalks is a participatory spatial tool which overlays virtual layers of meaning over real space enabling the user to create temporary location based interventions and temporary social spaces which tactically insert themselves into the urban environment, allowing users to inscribe a new set of meanings onto the very fabric of the city.

More than 600 JoyceWalks have taken place in over 70 cities worldwide.

The Art of Research: Research Narratives Chelsea College of of Art & Design, 2008 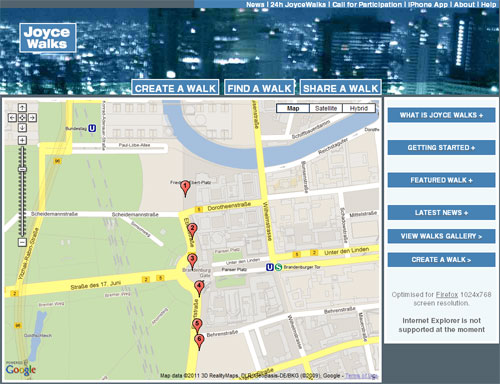