MADMEN the bitTorrent Edition
is part of an ongoing series of video made from TV show episodes incompletely downloaded from the internet via bittorrent.

MADMEN the bittorrent edition comprises of one episode of Madmen incompletely downloaded from the internet via bittorrent. The video has been linearly edited, no digital effects were used and all jump cuts and repeats are in the corrupted file.

The video captures an episode of the popular TV show in the act of being shared by thousands of users on bittorent with the corruption of the file a direct result of the bittorrent protocol. The video acts as a visualisation of bittorrent traffic and the practice of filesharing and avoids infringing the copyright of Madmen as it is incomplete. Curiously the greater number of simultaneous users sharing the file the more aesthetically pleasing are the distortion effects.

The video is part of the BitTorrent Trilogy. 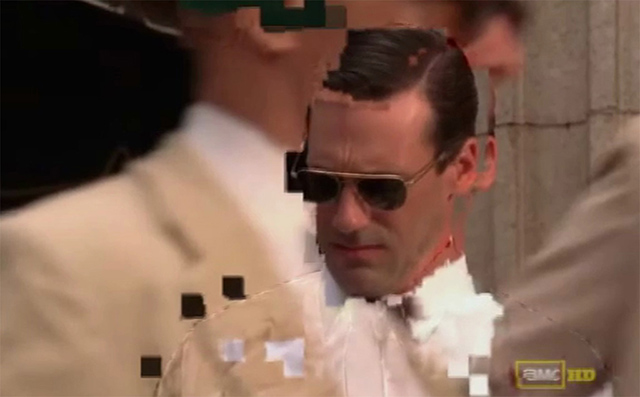